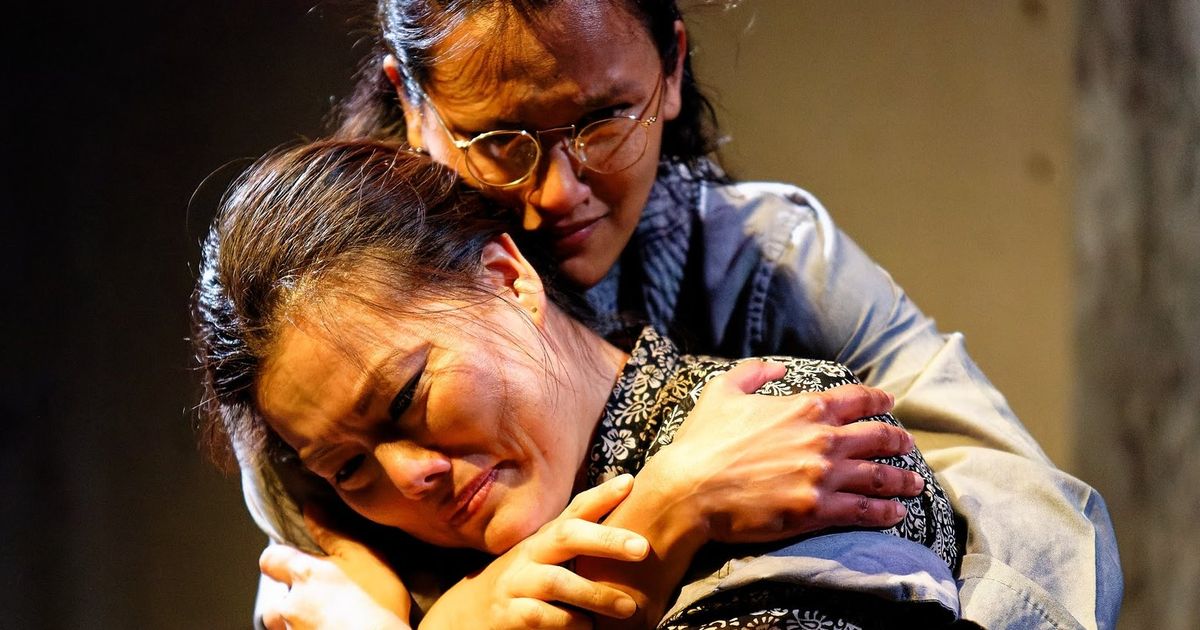 “These are the things I shouldn’t forget,” reads the first line of LuLing’s memoir, as passed down to her daughter Ruth. This line, and the sentiment behind it, launches a multi-generational journey and exploration of the importance of preserving generational knowledge in Book-It Repertory Theater’s production of “The Bonesetter’s Daughter”, adapted by Desdemona Chiang from the Amy Tan novel of the same name.

In her old age, LuLing began to lose touch with key memories due to the fog of dementia. She spends her time talking about ghosts and curses, which leads her daughter to worry that LuLing is losing touch with reality. But after Ruth finds these papers written by her mother in Chinese calligraphy, “The Bonesetter’s Daughter” sends us back in time, traversing three generations of mothers and daughters. Through this journey, we see that LuLing’s behavior is intimately tied to her fear of forgetting the truth behind a decades-old family secret, a truth she hoped to pass on to her daughter through writing.

Chiang tells a complex story that makes you lean in as you follow all the twists, turns and revelations in LuLing’s life. Chiang’s adaptation is aided by fantastic vision from director Rosa Joshi and designers Andrea Bryn Bush (stage), Dani Norberg (lighting), Juniper Shuey (projections) and Erin Bednarz (sound). At its best, this piece feels almost cinematic as it works through layers of flashbacks, first to LuLing’s childhood in China, then to LuLing’s mother’s childhood.

There are moments in this show that seem to burst, explode from the stage. At first glance, Bush’s set is quite simple, with a series of seemingly plain doors forming an onstage wall used as surfaces for Shuey’s projections. But it’s a few moments – when the doors are thrown wide open to reveal flowing, sheer curtains hanging behind them – that are truly memorable.

Throughout the play, projections are used to showcase photographs that the actors can hold in their hands and highlight the nuances between characters in Chinese calligraphy. But during these opening moments, projections of mountains and clouds as well as calligraphy flowing over every surface almost seem to transport the audience to an otherworldly realm. “The Bonesetter’s Daughter” is a story fundamentally about storytelling, the transmission of family tales through writing; these highly stylized moments, especially when juxtaposed against deeply grounded scenes, make the written word almost transcendent.

Unfortunately, while the production is conducted with respect for language and storytelling, it begins to lose its connection to the impact of that storytelling on future generations.

The setting of the play is that Ruth learns of her mother’s past through a story written by LuLing which Ruth has translated. The majority of the story then linearly follows LuLing’s life from childhood, except when there is another flashback within that flashback to tell the story of LuLing’s mother. It’s a compelling story to follow, but by the second act, a lot of hard-hitting reveals come out. The plot that brought us into the flashback in the first place – what will Ruth learn about her mother? – has dissipated.

We start to lose the connection with Ruth, who was the catalyst for all of this. Theoretically, that’s fine – after all, LuLing is the centerpiece here and Desirée Mee Jung is the heart and soul of this production playing LuLing. But the setting of the story puts us in Ruth’s shoes, and we never really check out how Ruth feels about some of these groundbreaking discoveries.

Maybe I’m stuck on this because it’s made worse by the choice to cast Sunam Ellis as both Ruth and Chang, a family associate of LuLing from her days in China. Throughout the play, Chang is the source of so much misfortune that has plagued Ruth’s mother and family through the generations. Chang is introduced as someone willing to beat a crying baby, kill, and steal to get what he wants. Don’t get me wrong, please keep Ellis on stage. She brings the perfect dose of slimy confidence to Chang. But without having a firmer basis for Ruth’s perspective on these events, I wonder if this casting is meant to reflect Ruth seeing herself in Chang – an obstacle to her mother finding joy, peace and truth – or if it’s just smart casting. keep a talented actor in two important roles.

Despite this, I remain fascinated by the story told in “The Bonesetter’s Daughter” and the care with which the language is treated by its creators. Of course, I’m left with questions about how this legacy plays out in Ruth’s life going forward, because it’s through her eyes that we seem to experience it all. But I’m also left with LuLing’s powerful journey and her daughter’s touching efforts to connect a mother to a past she’s afraid to forget.

Novels still cast a spell in the era of BookTok